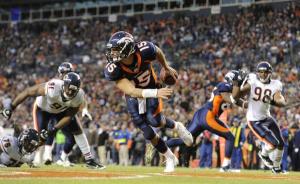 He did it again Sunday. Tim Tebow steered the Denver Broncos to another come-from-behind victory. Five times this season he has forged fourth-quarter rallies to win. When he assumed the quarterback position, the Broncos were 1-4. Now they are 8-5. You do the math.

Critics denigrate his passing ability. His slow release and less-than-optimum arm position result in faulty spirals and missed targets. When he scrambles, he runs more like a fullback than the most prized player on the team, leaving the Broncos only one injury away from the end of their mythical season.

Yet, when the fourth quarter begins (aka Tebow Time), many of those critics would still want Tim Tebow piloting their team. 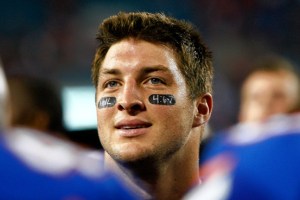 Also attracting critique are his unashamed expressions of Christian faith. His one-knee prayer on the sideline before the game has won a new dictionary entry, “Tebowing.” Postgame interviews always include references to Jesus Christ and God. In college (where he led Florida to two national titles and won a Heisman trophy), etched Bible references in the black grease under his eyes testified to his faith.

David Haugh of the Chicago Tribune exposes the hypocrisy of much of this criticism. “Tebow routinely gets mocked for thanking God first in postgame interviews. Yet we mostly shrug when NASCAR drivers thank their sponsors with the first words out of their mouths after winning a race. It’s much cooler for pro athletes to push products than piety. Why?” 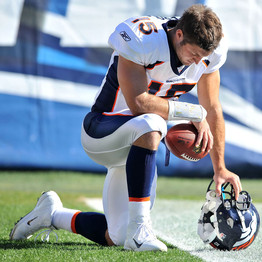 “The act of Tebowing … gets derided, but attention-grabbing choreographed touchdown celebrations get replayed ad nauseum. We act outraged at universities that get carried away treating football as religion yet it makes many people more uneasy to hear an NFL quarterback openly put religion ahead of football.”

Popular sentiment demands that religion remain in the closet. Why? Because aggressive faith produces fanatics who fly planes into buildings. If you possess a spiritual faith, great. Just keep it to yourself. So the advice goes.

Tebow upsets the censor cart. Not only does he freely exhibit his faith, but he does it on a large stage. Nothing captivates the media more than athletic success, except maybe political scandal.

Eight weeks ago, a Google search of Tim Tebow resulted in articles about his college career or NFL draft. He sat on the bench of a basement franchise. Few people expected him to emerge from the sidelines unless he corrected his flawed passing mechanics. Most people never thought about him anymore. 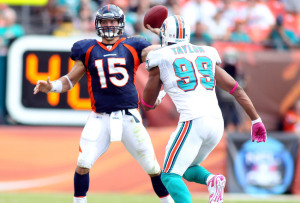 Tebow led the Broncos to an 18-15 OT win against the Miami Dolphins Oct. 23 (Photo by Marc Serota/Getty Images)

Then came October 23 and Tebow Time. After two weeks of preparation, he trotted onto the field to direct the Broncos offense. His stats were disastrous through the first three quarters. Behind 15-0 to the winless Miami Dolphins, with five minutes left in the game, Tebow passed for two touchdowns and ran for a 2-point conversion, tying the game. They won in overtime on a field goal.

Critics outweighed supporters after the ugly win and a loss to the Detroit Lions the following week. But he crafted a win against the Raiders the next week and then began a string of fourth-quarter comebacks for wins. Media attention has accumulated every week.

Tebow does not follow the typical interview drivel, deflecting questions about his heroics to the outstanding effort of his teammates. He thanks Jesus for his success, rather than giving some bland reference to God. But he also claims that God is not interested in who wins.

Tebow’s sincerity away from the camera matches his bold witness in the camera. He does not have a reputation for proselytizing teammates. He never comes across as judgmental and exclusionary. He has actively organized fund raisers for charities and spends weeks in the Philippines working with an orphanage. 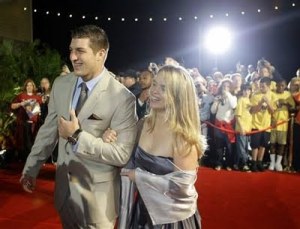 In 2009, he was in Florida to attend an awards banquet. The night before, someone introduced him to Kelly Faughnan, who was wearing a button saying, “I love Timmy.” A brain tumor had caused hearing loss and a persistent growth of visible tumors to this 20-year-old student. After visiting with her and her parents, Tebow asked her to escort him as his date at the banquet.

Most people believe that Tebow Time will soon run out. Regardless of his future in the NFL, Tim Tebow’s faith will continue to produce wins. He seems to have learned “how to be brought low … and how to abound” (Philippians 4:12).

As a sportswriter, Haugh doubts that Tebow can hide his passing deficiencies much longer. As a cynic, he believes his one-dimensional game will be short-lived. But as a father, Haugh “hopes his NFL career lasts as long as John Elway’s did,” acknowledging the model of character and inspiration that Tebow provides for the next generation.