Posted on December 6, 2011 by stanwiedeman 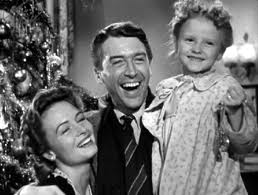 My wife recently observed that you can illustrate almost anything from the classic movie, It’s A Wonderful Life.

For example, have you ever noticed how people who are very good in giving support and encouragement to others, tend to suck at allowing other people to support them in personal crises? Their supply of emotional strength and wisdom overflows into the lives of others. When they encounter difficulty, they rely on that supply for themselves, overlooking the value of shared strength.

For these super-givers, the proverb, “Two are better one …. For if they fall, one will lift up his fellow,” only applies when the other person falls.

George Bailey (played by Jimmy Stewart) could not escape the pressing needs of others. His life was defined by personal sacrifices to help others in crisis. He was stuck in a job that smothered his adventurous spirit, but he dutifully sustained his small building and loan company because he recognized the financial, emotional, psychological and social benefits to others.

As the years added up, his respect in Bedford Falls multiplied. Sometimes he longed to pursue more exciting aspirations, but his sense of responsibility to serve his community and his friends would not allow him to leave town.

Then a simple mistake by his uncle compounded itself into a financial crisis. Before he could make a deposit of $7,000, Uncle Billy (Thomas Mitchell) misplaced it. Hours of frantic searching by George and Billy did not produce the money.

Back at the office, the state’s bank examiner waited to audit the books. George believed that the missing money would lead to a charge of embezzlement. Not only would it wreck his life personally, but it would close the doors of the building and loan, erasing his years of sacrifice to keep the business open and expunging the one place where people were treated with empathy and compassion in their financial struggles.

George plans to jump off the bridge

Did George turn to the community who loved him? Did he seek the support of friends and neighbors he had helped for years? No. He tried to fix his problem privately. With hope spilling out of his life as fast as coffee from an open cup while running to catch the train, George descended to a closeted solution. His death would yield a life insurance claim that would fix his financial problems, but he ignored the social chasm his absence would leave.

You really need to watch this powerful story to appreciate how it unfolds. In the end, news of his crisis spread like fire on a windy day in a water-deprived prairie. People came to George’s aid. George discovered the real value of friends when calamity forced him into a position of need and he allowed others to meet that need.

Our self-sufficient, privatized, American individualism corrupts our understanding of community. This distortion often seeps into our interpretation of the Scriptures.

Take Joseph, for example. God’s grace repeatedly elevated this man out of the pit of affliction to a peak of achievement. In every crisis, Joseph appeared to be alone. He had no support, no community, no friends to lift him up when he fell. But he always got up. His muscular faith enabled him to endure revenge and persecution and injustice without the side effects of bitterness and despair. God had chosen this young man for a mission and no opposition would derail him from succeeding.

The individualist might be inclined to conclude that community may be nice, but not necessary. Joseph survived on his own. Well-toned faith can sustain any person in his private journey, regardless of what obstacles lie in his path. God alone is sufficient. “All I need is God.”

This conclusion ignores the host of passages that assert the importance of community and interdependent relationships. God’s design of the church as an organic body, where parts of the body must work together to sustain life, refutes such a premise. Paul argues, “If one member suffers, all suffer together; if one member is honored, all rejoice together.” 1 Corinthians 12:26

When we choose to act independently, we harm the rest of the body. We may think we are suffering alone (the courageous martyr), but the other parts of the body are suffering as well. They may not know they are suffering, but the isolated member denies their contribution of love and support. Unused muscles atrophy.

Take a lesson from George Bailey. The path of isolation is dark and destructive. Reliance on friends distributes a burden into shared portions.

Combined strength multiplies individual strength. If you fall, you better hope you were not walking alone.

Christian seeking to find a biblical perspective on culture and life
View all posts by stanwiedeman →
This entry was posted in Community, Individualism, Movies, The Church - the Body of Christ and tagged community, George Bailey, individualism, interdependence, It's A Wonderful Life. Bookmark the permalink.