Zaineb Chaudhary did not come home from school one Friday and her parents reported her missing. The 16-year-old girl contacted friends through her cell phone the next day, but then went silent. Nearly six weeks later, authorities found her safe and unharmed.

Although the media cannot release specific details about her disappearance because she is a juvenile, most people believe she was trying to avoid an arranged marriage. Chaudhary’s father returned to the family’s home country of Pakistan in October to arrange a marriage. Chaudhary apparently did not approve of the arrangement.

Nearly a week before Chaudhary’s disappearance, 13-year-old Jessie Benderwas discovered living in a motel in California, missing from her home for over a week. Her parents initially said she ran away to avoid a

two-month family trip to Pakistan, home of Bender’s stepfather. They later changed the story, saying they believed she had been abducted by a Chicago man she knew through Facebook.

Bender told police that her stepfather was taking her to Pakistan to force her into an arranged marriage. A relative helped her flee her home, securing a motel room for her miles away.  Authorities took Bender and her three siblings from their home while investigations continue.

Incidences like these puncture the inflated opinions about multiculturalism. Arranged marriages are officially sanctioned in Pakistan. Both men were doing nothing wrong according to their cultural standards. The cultural practice emerges from a cultural value that depreciates women and restricts their rights.

For decades, political advocates have praised and promoted multiculturalism, arguing for the social benefit of interaction between differing cultures. Cultural relativism grew out of this position, treating all cultures as equal and morally neutral. Some people advocate preserving the coexistence of cultural distinctions rather than promoting assimilation into a single culture, calling it a salad bowl rather than a melting pot.

Some practices and traits of a culture may exist independently from particular values, such as food or dress. But many cultural practices are rooted in values and very often, religious beliefs. Adherents treat the practice with moral assertion, as the right thing to do and competing practices as wrong. 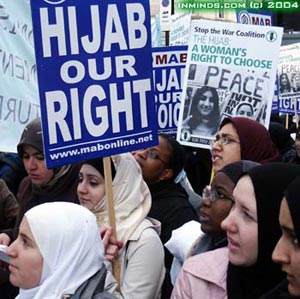 Protests in France over the wearing of the hijab

Multiculturalism suffered a severe blow in 1989 in France, when three Muslim girls were expelled from middle school because they would not remove their hijabs, the head covering for Muslim females. The minister of education supported the administrator. A few months later three more girls were suspended for the same reason. This led to student-led demonstrations. Over 100 girls were suspended between 1994 and 2003, but nearly all of them were reinstated by French courts.

The traditional Muslim scarves conflict with two French values. The French interpret the hijsb to represent female submission to men. Taking pride in the equality they have built into their society, they do not want to risk challenging this social standard by a male-dominant religious or ethnic group.

Second, the French promote unity throughout society, taking a strict posture for the separation of church and state. The French government has stated that wearing any clothing in public schools that clearly identifies someone with a religious affiliation subverts the desirable secularism. In 2003, President Chirac extended the policy forbidding the display of the hijab in public schools to secondary schools, jeopardizing the delicate peace between religious communities in France.

Arranged marriages present a similar problem for the U.S. Forced marriages would violate human rights standards in this country. When the state stepped in to take the Bender children into protective custody, it implied a value judgment on the practice. These two cultures are on a collision course and one will have to give way to the other.

Diversity may expand a person’s perspective of life and the world that we share with many different peoples and cultures. This does not mean that all cultures are equal. Values are embedded in many cultural habits. And values have moral weight, exposing every culture to moral critique. Competing cultures will need to dialogue and find ways to resolve value conflicts, because the ruling government legislates laws that protect the established values.

Historically, Christian values have come into conflict with the dominant cultural values, causing governing authorities to resolve the conflict. Very often, the authorities have pressured Christian communities to compromise or forfeit their values. Believing that God had mandated the questioned value, they chose to cling to it. In many countries this brought persecution. Lions dined on Christians in Rome’s Coliseum. Protestant Christians were incinerated by European governments in the Middle Ages because they taught doctrines that embarrassed rulers. Our own country was settled by many who were driven from their home countries in a cultural clash.

Values and beliefs require evaluation. They cannot hide behind appeals to multiculturalism, demanding immunity from criticism. Christians must not only refuse to compromise biblically informed values, but we must also enter into the dialogue of critique. If we hesitate too long, we may find ourselves in a vulnerable minority.