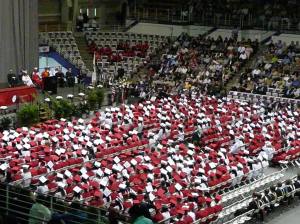 I attended my last high school graduation when my seventh child graduated last week (although I was reminded that I would probably attend a few grandchildren’s graduations). Each of my children has completed their education through the twelfth grade, at least.

It seemed pretty anticlimactic to me. I mean, there was never any doubt that my children would graduate. The only real variables were their ACT scores and GPA’s. Their graduation was a given. None of them struggled to make it to the platform.

At my daughter’s ceremony, the superintendent instructed the audience to refrain from any audible celebrations for the students when they were called individually. Security personnel were stationed throughout the field house with walkie-talkies, looking for violators. I kept wondering if President Obama was going to show up. 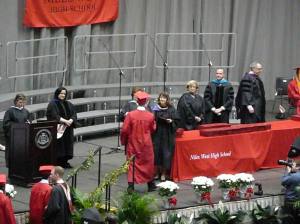 Some people could not restrain themselves. One mother jumped from her seat when her son’s name was called (I am assuming here) and threw her hands in the air, while shouting in jubilation. A security guard in front of her leaned his head toward his radio, pointed at her, then pointed to the exit. She was stunned, but she left, protesting with dirty looks. Everyone around her knew that these people meant business.

Verbal outbursts continued and only a few actually had to leave. I just shook my head at these ill-mannered people. What kind of people cannot respect the decorum of the ceremony? Don’t they realize how unrefined and brutish they appear?

There was a check in my soul. “What kind of arrogance looks down on the behavior of others?”

I do not know the stories behind these diplomas. Maybe some of these students spent countless hours just trying to decipher a language that is not the one spoken in their home. Maybe some had to do homework late at night, after they got off work, trying to help support their single mom. Maybe some parents cajoled and argued with their son or daughter for four years, trying to convince them of the value of education.

The point is, I was interpreting their behavior from my narrow and uninformed perspective. I measured their responses from a fortunate and privileged point of view. This kind of bigotry acts like a security guard for my understanding, preventing any outbursts from tolerance or compassion. How would I have acted if I had walked in their shoes the past twelve years?

How much of life do we live this way? Our limited perspective rushes to judgment. Our dogmatism disguises itself as wisdom. Our egotism masquerades as enlightenment. At least, this is the way it seems to work in my life.

Perspective is everything (well, almost everything). We have to realize that each of us is situated in time and space. Our education overlaps on a venn diagram, but our assumptions and opinions are shaped by so much more than mere education – heritage, neighborhood, generation, ethnicity, parental training (with each parent also situated), siblings (also situated differently from you), peers, extended family, experiences, religion, and the list goes on.

This should caution us from speaking ex cathedra and from acting as judge and jury over anyone. We need to take a dose of humility every morning with our daily supplements. Holding our positions loosely, we should invite dialogue as a way of examining them. If they are true, they will withstand any test. If they are wrong, don’t you want to change them?

This does not mean our perspective can never have certainty or authority. When a position rests on a higher authority, the odds favor its truthfulness. (Even then, the authority is likely to be situated and must withstand the rigors of evaluation.) The more often a position withstands the challenges and tests, the more certainty it accumulates.

At times, I have purposely refused to read certain authors because I knew they would challenge my position. I avoided conversations with people about certain topics because their position differed from mine and I did not want to examine it. I am so adverse to being wrong, that I carefully circumvent controversy. This has left me with an anemic and feeble perspective at times.

I am learning – slowly. My daughter told me that I am not as judgmental as I once was. That was encouraging. I hope her perspective is accurate.

Christian seeking to find a biblical perspective on culture and life
View all posts by stanwiedeman →
This entry was posted in Perspective, Tolerance and tagged arrogance, humility, perspective, tolerance. Bookmark the permalink.