Before you chuckle about her noble idealism, take a more careful look at what members of the Millennial generation (aka Generation Y) are doing. Different writers use different terminals to identify this generation, but Thom and Jess Rainer have determined to study those people born between 1980 and 2000 (inclusively).

In The Millennials: Connecting to America’s Largest Generation, they reveal some surprising discoveries. Participants in the study were asked to respond to a series of statements. To the statement, “I believe I can do something great,” 60% strongly agreed and 36% agreed somewhat. That response is staggering.

Of course, this is the generation raised by the Baby Boomers, who decided that human self-esteem is too fragile to endure criticism. They praised their children and their students for the smallest steps of progress and sought to insulate their children’s egos from any form of negativity. Some people have called the Millennials the Coddled Generation.

Follow-up interviews with participants unearthed an important truth. These young people do not define greatness in personal achievements like fortune or fame, but in making a difference in the world. For example, Emily said, “I really plan to make some contribution to this world in my lifetime. I don’t care if I rise to the top of an organization or become a political power broker. I just want to make a contribution.”

Sharon reflected this sentiment, too. Born in 1984, she is a practicing registered nurse while she works on her doctorate in nursing. When the earthquake crumbled Haiti in 2010, Sharon took two weeks of vacation so she could go to Haiti and serve. Her employer tacked on an additional week of paid leave. She reported, “Those three weeks in Haiti were life changing for me. That’s what I mean when I say I want to be great. I want to do something that makes a difference. I am doing something that makes a difference.” 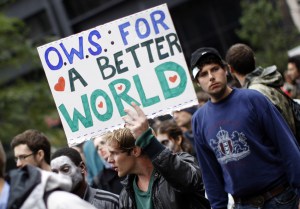 Some have criticized Occupy for its vague agenda, but the web site, occupywallst.org, sums up its grievance. “Our nation, our species and our world are in crisis. The U.S. has an important role to play in the solution, but we can no longer afford to let corporate greed and corrupt politics set the policies of the nation.” Wanting to correct the social and financial inequalities in our country, Millennials are attempting to influence what Edward Murray calls “the biggest, most ambitious, social reform of any financial system in our nation’s history.”

Occupy may succeed. It may not. Regardless, I suspect that Millennials will continue to find ways to make a difference in the world, both small and large differences. They are doing what followers of Jesus Christ have been called to do. Jesus instructed his disciples, “Go into all the world and proclaim the gospel to the whole creation.” (Mark 16:15)

Shouldn’t Jesus’ followers display the same passion and optimism of the Millennials? Jesus called us to proclaim the gospel of his kingdom. Where the gospel implants itself, people’s lives are changed and the kingdom of God surfaces. Jesus said the gates of hell cannot successfully stand against that kingdom (Mt 16:18). 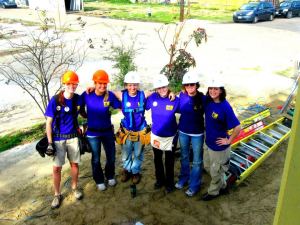 Millennials often populate building crews of Sold Rock Carpenters when they travel to Louisiana to build houses for the poor.

For example, Scott, Jeff and Mark Engle were moved with compassion when they saw the devastation of Hurricane Katrina in 2005. These Christian brothers began Solid Rock Carpenters to organize teams of volunteers from Chicago to travel to the south two or three times a year and partner with Habitat for Humanity in making a difference. They have led thousands of volunteers on more than 30 trips and built 23 houses in the Delta and more than a dozen in Mexico. They are bringing the kingdom of God to a place where they find brokenness and replacing despair with hope.

That kingdom does not mean mere paradigm shifts of belief, but dramatic life changes. And those life changes mean systemic reformation. Jesus inaugurated his ministry in a Nazareth synagogue with a quote from Isaiah. “The Spirit of the Lord is upon me, because he has anointed me to proclaim good news to the poor. He has sent me to proclaim liberty to the captives, and recovering of sight to the blind, to set at liberty those who are oppressed, to proclaim the year of the Lord’s favor.” Jesus put away the Old Testament scroll, looked at his hearers and said, “Today this Scripture has been fulfilled in your hearing.”

Jesus then set about traveling throughout the region preaching the good news of the kingdom of God that was now present. He healed the sick, set people free from demonic oppression, brought forgiveness to those suffering from guilt, and removed the spiritual and social bonds that imprisoned people. When he left earth, he transferred this same ministry to his followers.

In obedience to Jesus and in the power of his Spirit, we have a realistic hope of seeing genuine transformation of the world around us. We can and should make a difference. Thanks to the Millennials who are reminding us of our calling.