Shock waves rumbled throughout the modeling world in December when a Victoria’s Secret model walked off the runway. Kylie Bisuttii achieved national recognition in 2009 when she won the nationally televised Victoria’s Secret Model Search over 10,000 contestants. She was 19.

Almost 2 years later, to the day, she did not appear in the televised Victoria’s Secret Fashion Show (Dec. 1). Wanting to explain her absence, Bisutti tweeted, “I have decided not to model lingerie because I personally feel that I am not honoring God or my husband by doing it.”

“My marriage is very important & with divorce rates rising I want to do everything I can to protect my marriage and be respectful to my husband,” she continued. “God graciously gave me this marriage and this life and my desire is to live a Godly faithful life, I don’t however judge others for what they do. Everyone is convicted on different levels.”

In an interview on “ABC Good Morning America,” Bisutti told George Stephanopoulos that she is a “strong believing Christian” and had been reading her Bible more lately. “I was growing in my relationship with the Lord and in my faith. I just became so convicted of wanting to honor my husband with my body and wanting to be a role model for other women out there who look up to me.” 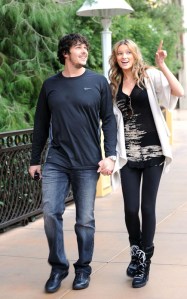 Kylie and her husband Mike Bisutti (Photos by Starzlife)

A recent encounter with her eight-year-old cousin had stopped her in her tracks. Watching Bisutti put on her makeup, the little girl told her, “You know, I think I want to stop eating so that I can look like you.” Bisutti was forced to reexamine the message she was sending to her fans, especially the young ones. “It broke my heart because she looks up to me … Thousands of girls that think that being beautiful is an outer issue and really it’s a heart issue.”

Every celebrity bears the responsibility of a message. The media relentlessly scrutinizes the lives of celebrities, often exposing things most people manage to keep private. This scrutiny demands that celebrities live more circumspectly. The message of their lives carries significant clout with many impressionable fans.

For two years, Bisutti lived out a message about the female body and about female identity. She believed her message did not conflict with Christian values or God’s moral standards. The more she read the Bible, the more she questioned that belief. One day last fall, she embraced a new identity and adopted a new moral standard, compelling her to modify her career.

She also learned that not everyone was correctly interpreting the message she hoped to send. She believes that the core of a woman’s beauty is internal, but little girls like her cousin saw only the external beauty. Wanting the kind of attention that this kind of beauty attracts, these young girls may make unwise and unhealthy choices to acquire it.

Although Bisutti has not made any judgmental comments about Victoria’s Secret or her modeling colleagues, her decision offers a corrective to the entire modeling industry. What messages does the company send on its runways and in its advertising? What moral standard allows a woman to reveal her mostly naked body to whomever wants to view it? What message does this practice broadcast about human nature? About women? About beauty? About modesty? About sexuality?

Bisutti’s choice cannot be relativized. Her new beliefs challenge the beliefs of others. Both sets of beliefs cannot be right. Does modeling lingerie honor God or not? Does the display of her body violate the sacred nature of her marriage or does it not? Or does marriage even have a sacred dimension that is affected by these kinds of choices?

If Bisutti’s beliefs are right, then contradictory beliefs are wrong. If Bisutti correctly interprets reality, then modeling that requires a woman to unveil most of her body devalues that woman’s self-esteem. It degrades female identity. It desecrates (“to divert from a sacred to a profane use or purpose”) the human body.

Not only has Bisutti declared a message about morality, but she has modeled exemplary courage and conviction. Wearing Victoria’s Secret wings brings prestige and wealth. She traded the admiration of millions for the praise of two, her husband and her God.

We can only hope that the millions are paying attention to this message. But even if they are not, Bisutti will live at peace with her conscience. She will enjoy the deep respect of a husband, who will find new ways to cherish his wife. And she will delight in an open and honest relationship with her God.