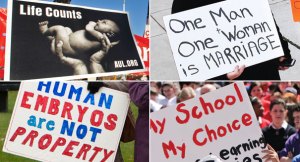 Conservatives use protests to change culture

Every public opinion poll reveals the same reality: same-sex marriage is steadily gaining approval. The Pew Forum has questioned Americans on this topic for 15 years. In 1996, only 27% approved of same-sex marriage and 69% firmly opposed it. In 2010 approval had risen to 42% and opposition had decreased to 48%. Illinois joined five other states that have legalized same-sex unions of some form.

Contrasting with the gradual shift in public opinion and legislation, since 1998, 29 states have officially banned same-sex unions to varying degrees. Prevailing political posture currently reflects the majority view that law should define marriage as a union between a man and woman only. If opinion continues the current trend, that majority will soon swing to favorability and we can expect a corresponding change in state legislation.

Conservatives will continue the mantra that most Americans disapprove of same-sex marriage. A strong religious protest will battle the trend and oppose the legislation. But culture will change right before our eyes.

Certainly, youth are more open to non-traditional values in any culture, especially in a world that changes at light speed every year. That does not explain the significant change in acceptance among the Baby Boomers. Statistics also reveal the shift has occurred even within every religious group, although at a much slower rate. Religious communities are grudgingly losing ground.

In his book, To Change the World, James Davison Hunter asserts that many Christians have adopted a false theory for social change, believing that the majority belief determines the social norm. Therefore, change occurs when a majority adopts a belief that differs from the existing norm. The LaBrosse-Levinson Distinguished Professor of Religion, Culture, and Social Theory at the University of Virginia argues that this faulty theory has led Christians to invest a large amount of energy in resources and strategies to effect cultural change that prove ineffective.

Davison uses the gay rights movement as one example of this erroneous theory. Comprising only about three percent of the population, this group has imposed an influence many times its size on the culture. Their beliefs have infiltrated the power structures of society. Movies, television sitcoms, opinion columns and radio programs have given priority to this issue. Opponents are stereotyped as homophobes or mean-spirited people who cannot think their way out of a paper sack. Rarely does the media provide thoughtful discourse on the subject.

The majority opinion has slowly eroded. Some of this happened by removing the “ick” factor. Placing homosexuality only in a favorable light desensitizes people to the initial reaction of disgust. Treating them as innocent victims of social bigotry evokes sympathy for their plight. The prevailing relative morality, which believes that every person should be left alone with their private moral standards, provides fertile soil for cultural change. Over time, the ubiquitous message that homosexuality does not harm society and deserves the same treatment as racial minorities persuades people to abandon their prejudice towards the homosexual community.

American Christians have tried the strategy of infiltrating social power structures to ensure their moral beliefs are not nullified by competing beliefs. They first embraced this tactic following the devastating victory of the abortion rights movement. In spite of their concerted efforts, they have done little to reverse the laws on abortion or bring about social change.

Crisis Pregnancy Centers use compassion rather than power

Christians have made their greatest contribution on the right to life issue through crisis pregnancy centers. These enclaves of compassion and love prohibit political rhetoric. They single-mindedly devote themselves to meeting women who face the emotional and psychological trauma of an unwanted pregnancy, including offering acceptance and healing to those women who have chosen to abort their babies. The stories of redemption reveal the sweeping impact of these centers.

Jesus did not try to use social power structures to introduce his kingdom to the world. He came as a servant, not a senator. He brought healing to the sick residents of a toxic society. He offered forgiveness to the lives broken by cultural beliefs that suck the humanness out of humanity. Jesus did not engage in a power struggle with the power mongers of his day. He refuted their beliefs, but poured himself out in humility and love, providing a different path from the existing avenues of socially accepted habits.

Hunter calls this faithful presence. This strategy was effective for populating the kingdom of God. It has rescued millions of women and babies from a culture of death. And it will prove to be the most effective strategy for bringing love and healing to a community of people who are confused and defensive about their sexual orientation. Are we willing to be faithfully present to them in the same way Jesus was present to the broken in his society?

1 Response to STRATEGIES FOR CHANGING CULTURE