Posted on November 6, 2012 by stanwiedeman

On October 22, an Italian court convicted seven scientists of manslaughter, holding them responsible for the deaths of 309 people at L’Aquila in an earthquake April 6, 2009. The conviction sent massive waves throughout the scientific community and raised serious questions about the role of scientific analysis in the prediction of natural disasters.

In January of 2009, a series of tremors in the region of Apennine Mountains of central Italy elevated the concerns of local residents. A scientific technician, whose methods the seismology community had shunned, first predicted the earthquake on March 29. He measured the emission of radon gas at four locations around the city, and the rising levels of gas indicated the probability of an earthquake around a 4 on the Richter scale. Based on his prediction, groups circulated through the city using megaphones to warn of an impending earthquake. 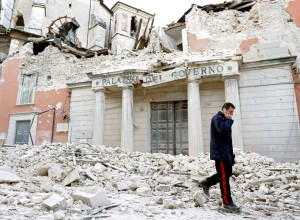 L’Aquila, Italy after a 6.3 earthquake hit in 2010 (REUTERS/Alessandro Bianchi)

Two days later, the Civil Protection Agency sought the opinion of the Major Risks Committee, a group of experts who assess the risks of natural disasters. The scientists concluded after a short meeting, “There is no reason to believe that a swarm of minor events is a sure predictor of a major shock,” according to volcanologist, Franco Barberi. Enzo Boschi, president of the National Institute for Geophysics and Volcanology, advised, “A major earthquake in the area is unlikely but cannot be ruled out.” Professor of earth physics, Claudio Eva added, “because L’Aquila is in a high-risk zone, it is impossible to say with certainty that there will be no large earthquake.”

Following the meeting, the head of the Civil Protection Agency, Bernardo de Bernardinis announced to the press, “The scientific community tells me there is no danger because there is an ongoing discharge of energy. The situation looks favorable.” Six days later the 6.3 earthquake devastated the town of 73,000.

A year later on June 3, all six members of the Committee and Bernardinis were indicted. Contrary to popular media headlines, they were not accused of failing to predict the earthquake, but were blamed for failing to properly assess the danger and communicate it adequately, leading residents to believe they were safe without a scientific basis. The scientists point the finger at Bernardinis for making the “no danger” statement, while the prosecutor argued that the scientists made no effort to publicly correct him.

In a more recent incident of scientific prediction, the National Hurricane Center calculated that hurricane Sandy would strike the northeast U.S. coast five days prior to the event. Using predictive models, computers crunched massive amounts of data from Sandy and 23 different simulations mapped a left turn into the New Jersey coast, contrary to historical patterns that veer away from land towards the ocean. The death toll has reached 113 and counting, but most officials believe it would have soared much higher without the early prognosis.

Scientists explain that predicting hurricane paths rely on more sophisticated and advanced tools than seismology technology has available. In the end, everyone would admit that predicting natural disasters will never achieve the same accuracy as determining the sunrise 100 years from today. Science has its limitations.

The success of the National Hurricane Center may blur those limitations. Science has already reached godlike status for many people. Expert scientific testimony sways the verdicts of juries and shapes the decisions of medical patients. And any superficial contradiction between science and religion usually weighs in favor of science, regardless of the distance between the theoretical and factual in the scientific process. Consequently, when scientists fail to perform with divine perfection, they might expect prosecution or litigation.

Humanity will always search for a savior, someone who can protect them from disasters, deliver them from enemies or cure them of illnesses. Like dressing dogs in human clothing, fragile beings have costumed science with divine garbs. Those who point out the fictional character of the emperor’s garments are denounced as obtuse or unenlightened.

A bridge in Mantoloking, NJ was destroyed by Sandy (Andrew Mills/The Star-Ledger)

A balanced perspective is needed. This balance will not depreciate the valuable contribution science makes to human life in a fallen world. It certainly has rescued us from many of the forces that seek to destroy life. In spite of its heroic role, science has yet to make the tiniest dent in human mortality. Although its advances continue to prolong life, it has yet to discover how to deliver from death.

Many years after God rescued the Israelites from Egypt through a display of God’s powerful control over nature, their perspective grew imbalanced. They began to cry out for a king, someone who would rescue them from the enemies who surrounded them. The prophet Samuel confronted them with their myopia, “But today you have rejected your God, who saves you from all your calamities and distresses, and you have said to him, ‘Set a king over us.’” (1 Samuel 10:19) God granted theme their request, but history proved that no human could meet their demands.

God declares of himself, “They have no knowledge who carry about their wooden idols, and keep on praying to a god that cannot save. Declare and present your case; let them take counsel together! Who told this long ago? Who declared it of old? Was it not I, the Lord? And there is no other god besides me, a righteous God and a Savior; there is none besides me.” (Isaiah 45:20-21)

God alone can predict with perfect accuracy. And God alone can save man. The benefits of science notwithstanding, attempts to deify it turn it into a wooden idol. This may qualify as the biggest crime of all.

1 Response to A SCIENTIFIC CRIME