TRUTH AND THE NEWS

Posted on September 18, 2012 by stanwiedeman

Can television news report the truth? This is not a rhetorical question. It can generate opinions on both sides and in the middle. Millions of Americans watch network and cable news, hoping to learn the truth about events in the world each day.

In his latest television drama, The Newsroom, Aaron Sorkin (West Wing, The Social Network) contends that this is not happening. Set in the newsroom of a nightly cable news program, a news anchor and newly hired executive producer swim against the current of corporate sponsors and commercial interests to reveal the naked truth about current events as they occur.

Critics have slammed the HBO summer series for its romantic moralizing, its “false nostalgia for an America that never existed” (Emily Nussbaum, The New Yorker), “a show in which paper-thin characters spend so much time congratulating themselves for ‘speaking truth to stupid’” (Maureen Ryan, The Huffington Post), a show that relies upon “the general American historical amnesia so many of [its] characters spend so much time decrying” (Charles Pierce, Esquire). 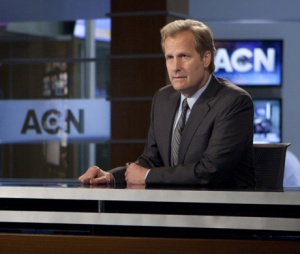 Despite the critics, The Newsroom raises an important moral question. Can television news report the truth? Will McAvoy (Jeff Daniels) has ascended to popularity above all other news anchors on television, because for the past three years he has refused to say anything controversial. He has conceded to the Nielsen ratings and acquiesced to the corporate sponsors. Swimming in the current of compromise, McAvoy creates no waves.

Facing an auditorium full of journalism students at Northwestern University, McAvoy suddenly explodes from his cocoon of passivity. Two other news anchors on the panel provide plenty of inflated opinions in a rhetorical brawl, while McAvoy sits quietly. When a student asks the panel, “What has made America the greatest nation in the world,” McAvoy uses his characteristic duck and roll, but the moderator refuses to let him dodge the question. Suddenly McAvoy goes off on a fact-filled rant to deny America’s greatness, ending with a nostalgic (and naïve) reflection on what once did qualify America as the example for other nations to follow.

Emily Mortimer as executive producer of Will McAvoy’s news program, MacKenzie McHale, in HBO’s The Newsroom

His diatribe leaves his innocuous image bloody and swollen. Most of his staff leaves him to produce for a rookie anchor in a different time slot, opening the door for his ex-girlfriend to fill the vacated executive producer’s chair. Recently returned from Afghanistan, MacKenzie McHale (Emily Mortimer) depicts idealism on steroids. Determined to create a news program that exposes the unguarded truth of world events, McHale endures McAvoy’s the seething venom of a jilted lover in order to persuade the genius anchor to join her crusade.

In the Gulf of Mexico, a BP deep-well oil rig explodes and begins dumping millions of gallons of oil into the Gulf at an unprecedented rate. The newsroom erupts into activity as sources reveal severe neglect and corporate cover-up. Anticipating the worst environmental catastrophe in decades, McAvoy and McHale combine their brilliant talents to produce a one-hour breaking news story on the Deepwater Horizon disaster that scoops every other news program.

Critics may have aimed their barbs well in many instances, but one must respect Sorkin for his pursuit of moral high ground. His left-leaning perspective may tint the characters’ sermonic dialogue, but he boldly engages a relevant moral issue: truth in news media.

Television programming is sustained by advertising. Corporate sponsors pay enormous amounts of money for both entertainment and informational programs. When Arthur

Nielsen ratings report the size and composition of audiences for every program broadcast. The ratings determine sponsorship. Using the ratings, corporations can predict how many people they can reach with their commercials. When ratings sink below a certain number, sponsors abandon ship and programs disappear from the schedule. News programs are not exempt from this formula.

Consequently, corporations dictate the content of what we view – and the news we hear. Controversial news or complex reporting may alienate large audiences, which discourages corporate sponsorship. If a news program becomes inconsistent or unreliable in its factuality, it will lose the confidence of viewers and will find itself in the network archives.

And what happens when news reporting exposes the dark side of corporate America? Threatened corporations do not make friendly sponsors. Producers must hold tight reins on their anchors if they want to stay on the air. This does not nurture an environment friendly to truth. Every news source that depends upon corporate advertising has bowed its knee to Baal and must be digested with skepticism.

Christianity centers truth, not in a system, but in a person. Jesus declared himself to be the Truth (John 14:6), not merely a source of truth. Because we love him, his followers should love truth. Because we follow him, we should seek truth with vigilance. We should not allow ourselves to succumb to this game of spin and slant.

The Newsroom may be flawed, even in its factuality, but we can appreciate its premise. Can the truth be protected and reported by television news?

Christian seeking to find a biblical perspective on culture and life
View all posts by stanwiedeman →
This entry was posted in Media and tagged Nielsen ratings, television news, The Newsroom, truth in news. Bookmark the permalink.