Every good story, either in book or movie form, incorporates a rescue. Good stories recognize the human conflict – with evil, with nature or even with one’s self. Most storytellers, except for the most pessimistic, want to convey a sense of hope and thereby introduce some means of rescue from the conflict. And most readers, except for the most pessimistic, want a happy ending at the conclusion of the story.

The Christian story is no different. People expect a happy ending. If there is a God in heaven, then surely he must be capable of rescuing his creatures from the evil that humans have failed to restrain for millennia.

A recent Gallup poll reveals that 85% of Americans believe in heaven. (This statistic defies the surge of secularism in every American institution.) As they understand the story, God rescues people from a world infected by evil and subordinate to an evil spirit. That rescue occurs at death, when the soul is released from its bondage to the body and transferred to a new residence absent of all evil.

It’s a great rescue story, but anyone familiar with the details of the Christian narrative might find it deficient. For example, if God pronounced his completed creation “very good,” would he abandon all of it except for the spirit he breathed into his human creatures? If God is rescuing humans out of the world, is he conceding Satan’s victory over the physical creation? If rescue from the world is the ultimate goal of human life, what is the purpose for remaining in a hostile environment? 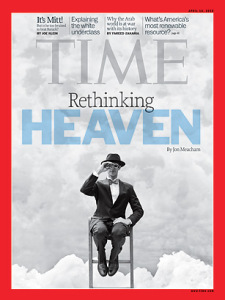 The cover of the Easter edition of Time magazine displayed the caption, “Rethinking Heaven.” In the feature article, “Heaven Can’t Wait,” editor, Jon Meacham, writes, “As Christians around the world prepare to celebrate Easter, a running debate about the hereafter is raising new questions about the definition of heaven – and what it says about the meaning of life.”

John Armstrong cited this article in his recent Act 3 Weekly, “Can Rethinking Heaven Improve Life on Earth?” In his commentary, Armstrong notes, “More and more young Christians are talking about heaven as reality beyond our ability to grasp, much less explain, which motivates them to make a more positive difference in this world now. They do not deny that there is a future aspect; they just stress the present impact of their belief as holding real value for life right now. Angels and gold streets are well and good but fighting HIV/AIDS is more urgent than talking and dreaming about what heaven is really like in terms of mansions and gold streets.” 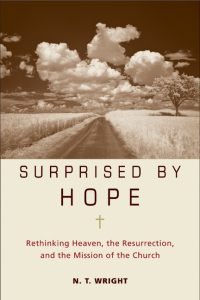 Surprised By Hope. In a more scholarly reexamination of the Christian story, he questions the “normal Western Christian view” of salvation and heaven, “that salvation is about ‘my relationship with God’ in the present and about ‘going home to God and finding peace’ in the future.” He believes that this view minimizes the resurrection of Jesus and truncates the resurrection of believers, in addition to altering the Church’s mission while it remains on earth.

The heaven-bound rescue has resulted in a protectionist mission strategy. The primary goal (perhaps the only goal) of the Church is to rescue as many people as possible from the final judgment – and remain unstained by the evil world in the process. Because the world will be consumed by fire in the final judgment, doomed to destruction, it has no place in the strategy. Most Christians consider the fallen world, including our contaminated bodies, as something we must endure in the present while we wait to escape it in the future.

Wright and other scholars read the story differently. They argue that Jesus did not invade earth merely to secure the escape route to heaven for his followers. Instead, he inaugurated the kingdom of heaven (synonymous with “kingdom of God”) on earth. In his incarnation, he fulfilled God’s original mandate, which the first human botched so miserably. Jesus, the second Adam, demonstrated what ruling over and subduing the creation looks like.

Mother Teresa devoted her life to bringing the kingdom into reality for the untouchables of India.

His death provided the ultimate blow to evil’s reign over man through sin and guilt. His resurrection conquered the power of death over fallen humanity. Anyone who trusts in Christ enters into that death and resurrection and transforms into a “new creature” in Christ. The new creation that began with the incarnation proliferates as more people enter the kingdom through the gospel.

The mission of the Church extends beyond the mere propagation of the gospel message. It includes the task of bringing the life of the kingdom to all of creation. That mission incurs greater opposition than unfallen Adam experienced, but it is no less possible due to the resurrection power of Christ that animates every kingdom citizen.

“When God saves people in this life, by working through his Spirit to bring them to faith and by leading them to follow Jesus in discipleship, prayer, holiness, hope, and love, such people are designed – it isn’t too strong a word – to be a sign and foretaste of what God wants to do for the entire cosmos. What’s more, such people are not just a sign and foretaste of that ultimate salvation; they are to be part of the means by which God makes this happen in both the present and the future.”  N.T. Wright

In this version of the story, God’s rescue includes the entire material universe, not just the immaterial part of a select group of creatures. Heaven is not the last chapter. God intends to rescue his creation from the curse introduced by man’s sin at the final “adoption as sons, the redemption of our bodies” (Romans 8:23).

This version does not diminish our future, but profoundly informs our present. Expanding the kingdom into our world during our lifetimes has limitless possibilities. It means we have much more to inspire us than heaven, by and by.

Christian seeking to find a biblical perspective on culture and life
View all posts by stanwiedeman →
This entry was posted in Heaven, Kingdom of God and tagged heaven, John Armstrong, Jon Meacham, Kingdom mission, N.T. Wright. Bookmark the permalink.