WHEN LOVE IS ABSENT

“We could have been having a critical discussion about the demons of cyberbullying and hate crimes, but we instead decided to flex our muscles and get tough. That’s not justice, for Mr. Ravi or for Clementi.” Jess Coleman, “Injustice at Rutgers,” The Huffington Post

On September 22, 2010, Tyler Clementi posted one last status on his Facebook page, “Jumping off the gw bridge, sorry.” That night he followed through with his announcement and jumped to his death in the Hudson River from the George Washington Bridge.

The tragedy drew national attention because Clementi was homosexual and was cyberbullied by his roommate, Dharun Ravi. Officials decided to prosecute Ravi on 15 counts, including bias intimidation, a basis for a hate crime. Last week, a jury convicted Ravi on all 15 counts.

Clementi and Ravi were randomly placed together as roommates in their freshman year at Rutgers. Clear differences established relational tensions. Ravi took advantage of Clementi’s social awkwardness. When Clementi asked Ravi to vacate the room until midnight so that he could have a guest, Ravi positioned his webcam for spying on the roommate while absent. Later he posted on Twitter, “Roommate asked for the room till midnight. I went into molly’s room and turned on my webcam. I saw him making out with a dude. Yay.” 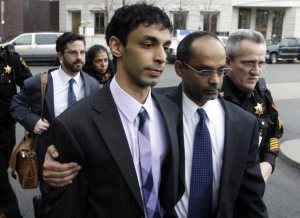 Two days later, Sept. 21, Clementi again asked for the room until midnight. Ravi tweeted that he intended to set up a webcam viewing of the tryst, although there was no evidence that he or anyone else turned on the webcam that night.

On that same day, Clementi apparently learned about Ravi’s spying. He reviewed Ravi’s Twitter 38 times over two days. He talked to the dorm’s resident assistant about Ravi’s harassment and submitted a room-change request. The incident seriously disturbed Clementi. One day later, he committed suicide.

Ravi’s defense attorney did not dispute the facts in the case. The case pivoted on motives and perceptions. Witnesses for the defense testified that Ravi had never made any disparaging comments about homosexuals in general or about Clementi’s orientation, only that he felt uneasy rooming with a gay student.

Ravi listens to testimony by Molly Wei with text messages between them displayed on a screen. (Mark Dye/Reuters)

To convict Ravi of bias intimidation, the prosecution had to prove that Ravi’s behavior was motivated by prejudice against homosexuality. Sexual orientation is a protected class under hate crime legislation along with race and gender. The complexity of the issue required the judge to instruct the jury for an hour.

The state did not charge Ravi for Clementi’s death nor was his death allowed as a factor during the trial. Only his action to video Clementi and use it for harassment applied. When the motive involves prejudice against a protected class, the hate crime law carries much more severe penalties than a conviction for bullying or harassment. Bias intimidation could draw a penalty of 10 years in prison. The judge will not sentence Ravi until May 21.

Everyone agrees that Clementi’s death was a tragic climax to very bad behavior, but many are debating the justice of the case. Had Clementi’s guest been a woman rather than a man, would it have attracted prosecution? Will a prison sentence appropriately punish Ravi’s actions? Should some classes of people be protected more than other classes by hate crime laws?

Questions abound about the justice of hate crime laws and the application of such to this case. But we should applaud the growing intolerance of bullying in any form. For too long we have accepted bullying as childish behavior, even in adults. Why have we not addressed it as a moral issue, like stealing or lying?

In moral terms, bullying must qualify as conduct contrary to love. Conduct contrary to love must be defined as a form of hate. Hate crime laws do not go far enough, because they restrict the definition to a few protected classes. Any action aimed to hurt another person physically or emotionally describes an act of hate.

Justice defines the penalties for violations of the laws formally enacted by legislation. If no law exists, no penalty can be exacted. Anti-bullying legislation moves closer towards the moral principle established by the Old Testament and reiterated by Jesus, “Love your neighbor as yourself.” All behavior should be judged by this immutable and comprehensive principle of love.

Parents should train their children from an early age that privilege does not define superiority, but responsibility. Having more than others (more wealth, more strength, more power) obligates a person to use that privilege in love, to provide for and protect those who lack the privilege.

How differently would our society look if biblical morality were applied. Critics often cite the severity of Old Testament penalties, but they must be interpreted in the context of the entire biblical text.

Jesus lived out justice in the context of love, and he always extended compassion and generosity to the outcast, to the underdog, to the weak. Jesus condemned those who did not protect the widow or the orphan and who used privilege to elevate themselves over others.

Kingdom law can be summarized by this principle of love. Kingdom citizens should be identified by their consistent practice of love, not just in words, but in deeds. Every follower of Christ makes a kingdom impact on society when we live out this principle daily.