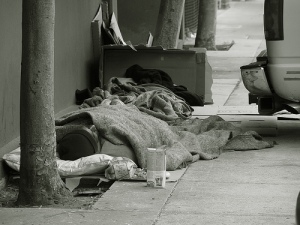 Should the Church become culturally relevant? This question gets kicked around by Christians. The negative side fears absorption into the world and apostasy from the faith. The positive side fears society’s disregard and the attrition of the Church’s mission.

The current economic crisis has laid cultural relevancy at the Church’s door. Throughout history, the Church has had a reputation for compassion and generosity. Christians took an active interest in the affairs of their communities, particularly in humanitarian causes.

Today’s (11/21) WBEZ program, “Eight Forty-Eight,” addressed a severe problem in the Chicago area. Both the federal and state governments have to reduce their runaway deficits. Both have proposed deep cuts to human services. 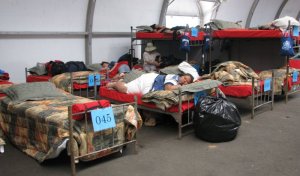 These cuts have created a crisis for programs like the Homelessness Prevention Program and the Emergency and Transitional Housing Program. HP provides one-time emergency payments on utilities, rent or mortgage to give temporary assistance to a family in crisis. The program gave grants up to $1,000 to 96,000 households last year, helping them avert homelessness. ETH provided emergency housing to over 40,000 people in Chicago last year, enabling homeless people to get off the streets at night.

Illinois’ Department of Human Services projected a $250 million increase to their budget this year to meet escalating needs. The governor’s budget not only ignores the request, but slashed another $150 million from the budget. In 2009, Illinois disbursed $11 million to programs like HP and ETH. Homeless agencies expect to receive only $1.5 million this year. The federal government will no longer accept applications from Chicago agencies for funding. 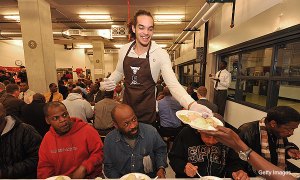 As the funding dries up, the homeless population swells. In Chicago last year, 93,000 people lived on the streets. Current trends promise more cement inhabitants. Most agencies rely entirely on federal and state funding. Some have already closed their doors and others face grim prospects.

A second basic survival service, food banks, also face a supply crisis, as an article in today’s Chicago Tribune indicates, “Food pantries struggle to do more with less for holidays.” The USDA provided 30.1 million pounds of food to Illinois in the last fiscal year. Authorities expect only 18.8 million pounds this year, a 37.5 percent reduction. Chicago alone expects to see an 8 million pound decrease from the 69 million pounds they distributed last year.

Food costs are exacerbating the problem. The Harvest Food Pantry in Evanston gave out 500 bags of food last Thanksgiving, costing about $5,000. The director expects a 20 percent spike in that cost this year to $6,000. Food prices last month increased by 4.6 percent over the same month last year. 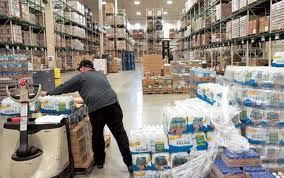 The Greater Chicago Food Depository served food to 5.18 million people by the end of its fiscal year, shy of the 5.2 million record between 2009 and 2010. The Depository has received 7,000 pounds of food per month less since the middle of the year. Local food pantries who depend upon the Depository for its supply must look to local contributions to reconcile the deficit.

Some churches entered the social services scene many years ago. Many churches participate through their denomination’s branch of compassion ministries. In spite of the many efforts, the Church’s contributions pale in comparison to the state’s. Now the state has chosen to ignore the critical needs of its citizens. A bureaucracy cannot love its neighbor like an individual can.

Churches face the problem of being paralyzed by the staggering need. Instead of dividing itself into small ministries, the local church would more effectively benefit the community by focusing its energy and resources on one or two local services. Even if a church can offer only a few loaves and a few fish, God can multiply that donation to feed hundreds.

A man walking along the shore one day noticed that a storm had washed thousands of starfish onto the beach. In the middle of this marine crisis, a young boy was picking up starfish and throwing them back into the ocean. The man asked him what he was doing. “If these starfish don’t get back in the water quickly, they will die,” the boy said. “But there are thousands of starfish. In the larger scheme of things you’re not going to make much of a difference to all these starfish.” The boy reached down, picked up another starfish and flung it into the ocean. He looked at the man and said, “It’s going to make a big difference to that one.”

The Church has an opportunity to make a big difference in the lives of millions of people, if Christians will collectively find ways to show biblical hospitality to strangers through acts of compassion. These ministries will raise the Church’s relevance quotient.