Posted on September 27, 2011 by stanwiedeman

“If the essence of religious identities is not your beliefs about God but your membership in a God-seeking community, then the ultimate heresy is not to deny the existence or attributes of God but to deny your obligations to the people around you, and the most severe punishment is not to cut you off from God (can any human being do that to another?), but to cut you off from the surrounding community.”     Rabbi Harold Kushner 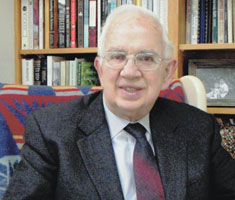 Rabbi Harold Kushner’s first book, When Bad Things Happen to Good People, became an instant success. Kushner demonstrated a compassionate and sensitive heart as he grappled with the perennial questions about good and evil and the reason behind human suffering. He later wrote To Life in 1994. In it, he attempted to explain Judaism, which he believes to be the answer to the real problem of life. He asserts that Judaism provides the best path to being fully human.

According to Kushner, being Jewish relates more to a communal identity than to a system of beliefs. “One of the most important differences between Judaism and Christianity is that we were a people before we had a religion.” He refers to the existence of Abraham’s descendants as an ethnic population (over two million when they left Egypt) before they received the law at Mt. Sinai and entered into a covenant relationship with God.

This view seems to minimize the theological origin of the Jewish community. Abraham was selected by God to father a nation, with whom God would enter into a covenant and entrust his law. The nation would become God’s witness to idolatrous nations that the one true God exists and rules over heaven and earth. 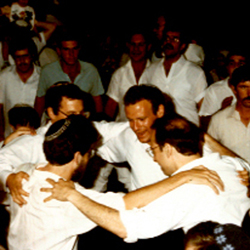 For Kushner, the community defines Judaism more than its theology. He does not deny the importance of Jewish beliefs, but arriving at an accurate interpretation of God and his work ranks behind faithful participation in Jewish communal life. The primacy of ethnic identity compares to the blood-is-thicker-than-water principle of life. The community is family and you accept family no matter what, with all its theological aberrations.

He contrasts this with Christianity, which begins with a belief. That belief grants entrance into a faith community. Without certain core beliefs, one remains outside this community. It is no less a community, but it is defined by belief rather than birth. In fact, ethnicity should never cause division within the faith community. “There is neither Jew nor Greek … for you are all one in Christ Jesus.” (Galatians 3:28)

New Testament authors compare the relational connections in the faith community to a building, a family and a human body. They describe the Christian community in the same terms Kushner defines the Jewish community, but with a different structure.

At the center of this community and circumscribing its borders is Jesus Christ. Jesus defines, delimits, informs and inspires this community. Relation to him secures relation with every other member of the community.

The individualism of American society has greatly diminished our understanding of community. This has produced significant mobility between local church communities. If members disagree with one another over beliefs or practices, they separate, joining another local community or forming a new one. People usually gravitate away from diversity and toward homogeneity.

Dilution of diversity redefines the community. Local communities begin to emphasize the qualities that distinguish them from other local communities.

Although they share the same core beliefs that define them as a single faith community, they can easily demote those beliefs in order to characterize each local community by secondary attributes.

This perpetual division and redefinition erodes the unity that Jesus envisioned for his community.

On the night before he was crucified, Jesus asked the Father “that they may be one even as we are one. I in them and you in me, that they may become perfectly one, so that the world may know that you sent me.” (John 17:22-23) This intrinsic unity exists by virtue of the relationship every believer has with Christ, but a visible extrinsic unity remains blurred.

So how should we interpret Kushner’s contrast between Judaism and Christianity? Judaism clearly possesses an ethnic dimension, but that ethnic existence originated with a belief, that God had chosen Abraham and his descendants for a special role in redemptive history. Theology preceded the community. To emphasize the community over theology devalues the calling and mission of the community.

The Christian community likewise exists because of God’s calling and mission for it. Just as Israel was to bear witness to the reality of the one true God, so the Church is called to the same mission. The community plays a key role in that witness.

When we allow secondary issues to divide that community, ignoring the essential solidarity we share in Christ, we too forfeit our calling and mission.

Judaism and Christianity may be more alike than we realize.

Christian seeking to find a biblical perspective on culture and life
View all posts by stanwiedeman →
This entry was posted in Christianity and Judaism, Community and tagged Christian unity, community, Harold Kushner, Judaism, mission, To Life. Bookmark the permalink.