The Willow Creek Association’s Global Leadership Summit was less than one week away when Howard Schultz, CEO of Starbucks, called to say that he had decided not to speak at the Summit. Gay Rights activists threatened to boycott Starbucks if Schultz spoke at the event.

Political consultant Asher Huey posted a petition on Change.org calling for the boycott. “Schultz is speaking at a conference hosted at and sponsored by an anti-gay church. This is unacceptable,” the petition said. “The church has long practiced dangerous conversion therapy to ‘cure’ people of their sexual orientation. … Not denouncing these practices is tacit approval.”

Willow Creek supported Exodus International for many years. This ministry’s vision statement reads, “Mobilizing the body of Christ to minister grace and truth to a world impacted by homosexuality.” Exodus believes reorientation from same-sex attraction can occur, and has served tens of thousands of homosexuals since it began in 1976.

The petition had garnered over 700 signatures when Schultz requested to be removed from the speakers’ list. He did not want another PR black eye. Pastor Bill Hybels and WCA president Jim Mellado talked with Shultz for nearly an hour and agreed to release him from his contract without penalty.

In 2009, Willow Creek decided to discontinue its long-standing affiliation with Exodus. Assessing its recovery ministires, Willow’s leadership determined that many homosexuals did not experience the promised reorientation. In these cases, instead of therapy, Willow offers acceptance with a call to abstinence.

Hybels challenged the petition’s accusations in a public statement at the Summit. Clearly grieved by the charges, Hybels said, “… not only is Willow not anti-gay, Willow is not anti-anybody.”

Hybels continued, “Our church was founded on the idea that people matter to God. All people. All people of all backgrounds, all colors, ethnicities, and sexual orientation. The mat at every door on this campus has always read “Welcome.” And for over 35 years we have flung the doors of this campus open to the widest array of humanity I have ever witnessed in the global church. And thousands–tens of thousands–have come to learn the teachings of Jesus. So to suggest that we check sexual orientation or any other kind of issue at our doors is simply not true. Just ask the hundreds of people with same-sex attraction who attend our church every week.” 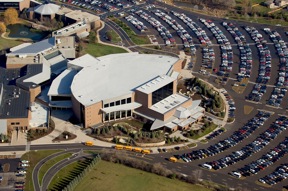 Don’t rush to judgment just yet, because Willow has not compromised the biblical standard on sexuality. Hybels stated, “Now what is true is that we challenge homosexuals and heterosexuals to live out the sexual ethics taught in the Scriptures–which encourages full sexual expression between a man and a woman in the context of marriage and prescribes sexual abstinence and purity for everybody else.”

Willow Creek has always positioned itself as a church who truly loves people – all people. It has struggled to extend that love in a godless culture without diluting or deserting biblical truth in the process. Willow has changed, adjusted and modified to attract every person who is willing to listen to the message of the healing and forgiveness of God through Jesus, and they have striven to do it with integrity. 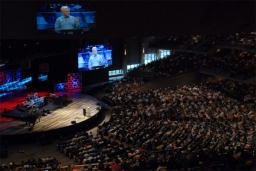 Hybels lamented, “But even as we challenge all of our people to these biblical standards, we do so with grace-filled spirits, knowing the confusion and brokenness that is rampant in our fallen world. And at Willow we honor the journey of everyone who is sincerely attempting to follow Christ. So it’s unfortunate that we could not have explained this to those called us anti-gay and started this petition.”

A close look at the life of Jesus reveals a startling contrast to popular Christianity.  He was criticized by the respected religious leaders for eating with tax collectors and sinners. Society’s outcasts felt comfortable in his presence. Prostitutes worshiped him. The sick, broken, unsavory and rejected flocked to him like ants to a picnic. They sensed that he was safe, that he would not condemn them for their bad choices and failures, and that he could provide healing. He gave them hope. He gave them love.

Christ followers incarnate Jesus in and to the world, but respectability has defaced our image. The tax collectors and sinners would rather starve than sit down for a meal in a church. Instead of love, they expect judgment. Instead of acceptance, they expect scolding. Instead of hope, they fear walking away with more guilt.

But wait. Wasn’t Willow misjudged and condemned? Yes it was. But instead of striking back, it opened its arms wider, inviting the very people who denounced it to come and eat at the table of Jesus, where no one is denied for any reason.

Current criticism of Christians, deserved or unfair, requires the followers of Jesus to make extraordinary efforts to reach out in love to the tax collectors and sinners – that is, if we are ready to be criticized by the other side of society like Jesus was. Perhaps the Church needs its own reorientation.