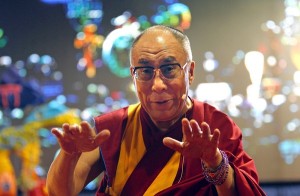 “We all come from a mother’s womb … everyone wants (a) happy life … everyone has a right to further that desire.” The Dalai Lama spoke these words at the UIC Pavilion on Sunday. His address attracted over 8,000 people.

The Dalai Lama also stated, “The very purpose of different religions is to create inner peace, tolerance, forgiveness and patience.” At one time he believed that his Buddhist religion was superior to other religions, which were “so-so.” Meeting other spiritual leaders like Thomas Merton and Mother Theresa changed that. Now he sees “the bridge between religions.”

The increase in religious violence clashes with the Buddhist monk’s message of non-violence. “Conflict in the name of religion is difficult to understand.” Violence contradicts any religion that has as its goal tolerance and forgiveness, and impedes any effort to achieve world peace. 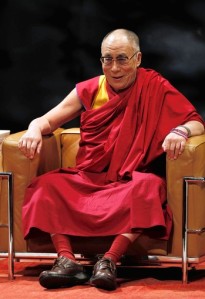 The audience sat spellbound during the Dalai Lama’s two-hour speech. Samantha Castello summed up her experience, “Learning more about him has led me to a more spiritual path of enlightenment, peacefulness, happiness.”

Many people interpret the Dalai Lama’s message as harmonious with Jesus’ teaching. Both leaders advocate love and compassion as a way of life. Jesus surpassed every standard of love in his day when he said, “You have heard that it was said, ‘You shall love your neighbor and hate your enemy.’ But I say to you, Love your enemies and pray for those who persecute you so that you may be sons of your Father who is in heaven.” (Matthew 5:43-44)

Although Jesus and the Dalai Lama call for the same behavior and agree on the virtues that constitute the good life, the similarities end there.

The sources of these virtues differ in the two religious systems. Christian ethics grounds itself in the character of the personal and moral God. As personal creatures, we have the moral responsibility to act in compliance with God’s standard of goodness, which comes from his own nature.

Buddhism knows no such God. Karma compels moral behavior for Buddhists. Karma is a universal law of existence. Violating karma results in consequences, like throwing a ball into the air will always result in it falling back towards the earth. Because it is impersonal and amoral, breaking the rule of karma does not result in sin or the threat of judgment, only a negative and unwanted result.

Why does this matter? Don’t both religions produce the same desirable outcome? Only superficially. If sin has infected every aspect of human nature, then virtuous behavior requires the control of that sinful impulse. Rewards and punishment, the essence of karma, can train some people to adopt some virtues to a certain level.

But many people refuse to conform to the standards, regardless of the consequences. They believe that the benefits of bad behavior outweigh any risk of negative effects. They are pursuing a “happy life” as they desire it.

Buddhism cannot adequately explain the failure of karma to motivate every person towards virtue. Nor does it provide a comprehensive explanation of evil.

Sin exists on a limited scale in Buddhism, referring to deliberate acts of evil or to any evil desire. The system does not require any judgment for sin, but only a movement away from it and toward virtue through enlightened practices.

A habit of enlightened practices grows out of the abandonment of evil desires. In fact, Buddhism teaches that enlightenment occurs in the absence of all earthly desires. On this level, it makes no distinction between good and evil desires, but all human desire interferes with ultimate spiritual reality. Buddhism denies reality to achieve ultimate reality.

Christian distinctions of good and evil are derived from the nature of God. Although evil cannot be explained exhaustively in Christian theology, its teaching is much more comprehensive and friendlier to experience. 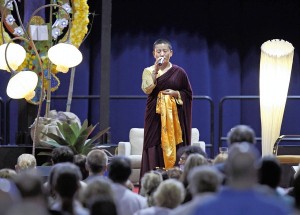 It seems ironic that the UIC program concluded with a Buddhist performer singing “Amazing Grace.” The song rejoices in a salvation from sin through the grace of a personal and just God, not a personal enlightenment through the denial of desires.

We live in a moral universe where moral creatures make moral choices every day. The effects of those moral choices exist because a moral God has established the moral rules for his creatures. These effects are both physical and spiritual in nature and they all point to the ultimate reality of a personal God.

We can all applaud the Dalia Lama’s appeal to love and peace, but those words should not confuse us about reality. What Jesus taught for experiencing and achieving those virtues differs significantly from what the Dalai Lama teaches. Jesus appealed to a personal God, who does not even exist in Buddhism.